So you have a business and are excited about your product. You want to increase sales so you begin to get on the phone and call people. You develop a pitch. You develop your "phone voice" and persona. Whole books have been written on the art of the sale and the art of cold calling. People have worked very hard to develop this skill.

In the early days businesses bought lists and this dramatically increased the scope of their calls. Later technology allowed them to automatically dial the next person on their list and even have these background auto dialers and connect calls to the person who would conduct the phone call to do the cold calling. The more efficient the technology the more calls that could be made more cheaply.

Which brings me to the really messed up call that I just got ON MY CELL PHONE!!!!! Once I finally understood what the poor Indian was trying to say and who they represented it hit me: My iPhone, which is on the AT&T phone network, has just been dialed a call from friggin India to pitch me for AT&T Yellow Page services. Talk about abusing your customers.

But what really struck me was not only how offensive the call was, but how horrible it was. The connection quality was poor - there was a huge delay as the call connected to the other side of the globe - and the Indian voice on the other end was hardly legible. I'm sure that call didn't cost AT&T very much. It sure shouldn't because it was the worst cold call I think you could possibly imagine. An Indian who I could hardly understand was calling me out of the blue over a very poor connection wanting to talk to me about services I have absolutely no need for. Talk about a waste of their and my time.

Is this what it has come to AT&T? Where you misuse your customer's phone numbers to poorly pitch services we don't need? Shame on you.
Posted by Curtis Forrester at 8:57 AM 1 comment:

How Stuff Works: Death by Cubicle
Posted by Curtis Forrester at 3:51 PM No comments:

I just had occasion to use the MovieCube rental machine at my local Kroger store. My son

wanted to bring Wall-E to school for the Friday lunch since he's "president" this month and responsible for snacks and entertainment. I only had the Blu-Ray version of the movie and doubted the school had a player. So, I tried the $1.00 rental from the MovieCube.

I have to say, it was super easy. It had a touch screen to select the movie, added it to my cart, and clicked "check out" just like any online e-commerce website. After swiping my credit card I waited a few seconds while it connected and verified and viola! out came the DVD in a plastic "cassette". Returning the movie was just as easy.

It's a great idea. By definition the selection is much more limited than what I can either stream or have mailed to me by Netflix; it had all the recent popular titles. I've been worried that as grocery stores and small mom and pop rental business have shut down the only local choices would be the hated Blockbuster. This is a very cool, very easy alternative when I need a movie now and can't wait the day or so for a Netflix shipment.
Posted by Curtis Forrester at 9:28 AM No comments:

BP Gets my Biz

As infuriating as the price hikes are after Ike, it's nice to see local British Petrolium stations are not gouging, at least the cases that I've seen. I looked up the local gas prices down by our office and the lowest was a BP at 3.79. I wasn't sure if they'd still be low - or have gas. Zipped down and sure enough. They had gas and it was still 3.79/gal.

Nice - Kudos to BP Gas. You'll have my biz in the future.

(Of course, the question is - are they being altruistic/responsible or maybe those crazy Brits didn't realize a hurricane was coming to town :)
Posted by Curtis Forrester at 3:19 PM 1 comment:

I used to use this...forgot about it, recently saw a reference. It's pretty neat.

In this election season it might be good to ponder the other areas of our day-to-day that involve a vote of sorts. We choose to stop at a certain gas station, for example, not necessarily for the quality of gas, but the quality of service, convenience, and maybe the Quik Cup of Coffee. Every time we stop in they either work to retain our vote, or alienate it.

Car dealerships also get votes. I'm in the market for a car and as I review my options and update myself on the various offerings each auto maker has, there's a running vote in my head. In my early twenties I got cornered by the high pressure salesman and his bad-hair piece credit manager and barely escaped with my life. As a result I've never entered a Nissan showroom nor considered them an option. Their attitude has tipped my vote against them in an irrational and permanent way.

BWM of Roswell has also lobbied for a vote against BMW [Update: Yes, Grant - specifically, this is about this dealership, and the service department people. It might be about Friday afternoon too.]. My 91 Camry is on its last metaphorical leg. Though I've fixed this and that it sometimes doesn't want to start. I stopped by the BMW dealership on the way home to take a look at the new 1-series, which looked very nice on the web, and turns out looks very nice in person. The sales guy was helpful enough, though he did not offer a test drive. I guess it was the unshaven Friday face, jeans and loud Siveillance Orange T-Shirt. And maybe that was also why when my poor Camry failed to crank up I failed to get them to help jump start it.

In the end I spent an hour in the BWM parking lot, just outside their showroom floor, surfing the web looking at Audi, Lexus, Volvo and Honda. While they wouldn't help start my car, it sure was nice of them to give me free wireless to research all their competitors.

Upon telling this story to Joe Robb, my excellent Lexus sales rep, who has now received repeat business from me, he said I should have called him and that he'd have sent someone over or come himself. I actually don't doubt that he would. Even if it had been totally self-serving on the part of BWM to help me with a friendly attitude in order to sway me to buy that nice 1-series...it would have gone a long way in swinging my vote their way.

BTW, when I say BMW wouldn't help what I should say is that three people from their service department said they'd help and then left me waiting in the very hot car while they went to get something...or a car... or did whatever they did. Fortunately, after I was done using their wireless and my battery was getting low, I expertly (er, randomly?) jiggled some wires under the hood and she started right up.
Posted by Curtis Forrester at 5:31 AM 1 comment:

We travelled to the town of Wasserburg last night. This is the hometown of Ralf, one of our hosts in the office. We were not disappointed. It's wrapped in the Inn river and there is only one bridge entering (there's another road through the mountains). The town is rich with history, with shops and cafes and great cobblestone roads. As usual for Bavaria it has a large historic catholic church. 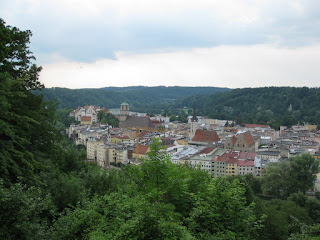 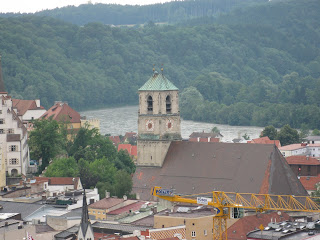 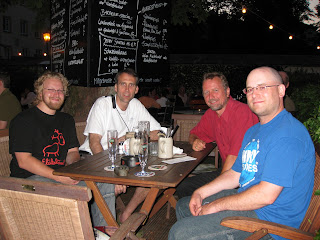